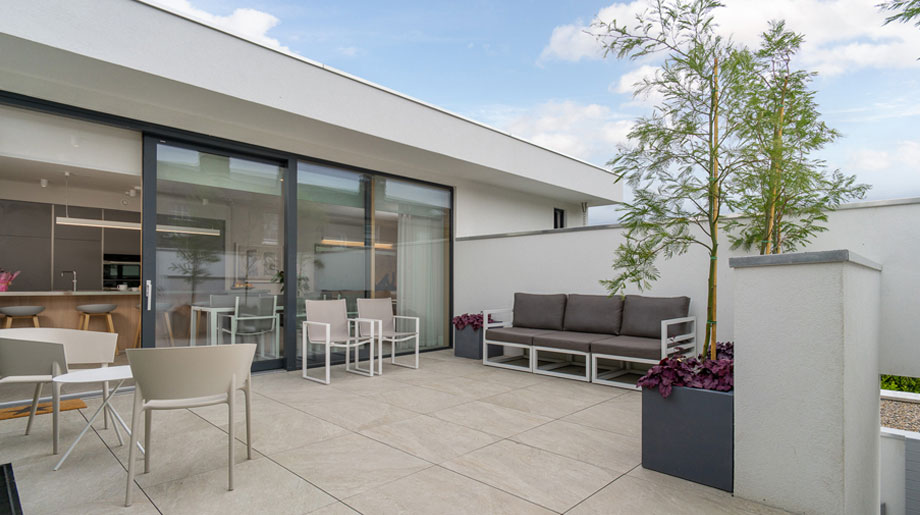 Something in the Aircrete: Ireland’s first net-zero passive house “plus” costs just €300 a year to run

It’s been dubbed “the future of housing in Ireland” by The Irish Times, with Passive House+ magazine lauding it as a project which “redefines what is possible”, high praise indeed for Ireland’s first A+ rated, net-zero passive house ‘plus’, the creation of Architect Mel Reynolds.

The goal was to achieve a house as close to carbon neutral as possible without extra costs; mission accomplished as the costs are only marginally more than a standard A-rated semi-detached build, but the performance goes far beyond. Boasting total energy bills, including heating and hot water, of just €300 a year (excluding standing charge) and combined carbon emissions nearly five times lower than those of a standard A-rated house and diesel car, Mel’s flexible, 3-bed mews is the ultimate goal for many house builders in Ireland.

To achieve this standard required clever design throughout, not least in the wall construction. For this, Mel chose to specify Aircrete blocks with an external insulation system, or SIMS (Super Insulated Masonry Solution). It’s a well-established construction method internationally, and the standard construction method in many European countries, such as France, Germany, Finland, Belgium, Italy, the Netherlands and more. For Mel, this is not his first rodeo, as he has been specifying this method here in Ireland for years, having studied passive house standards and realising the benefit of a super insulated wall construction.

The walls of the South Dublin property are built using a single leaf masonry construction of 215mm Mannok Aircrete blocks, with 140mm external insulation and a Baumit render. According to Passive House Plus, “Reynolds found a way to achieve exceptional thermal performance while keeping the wall slim and simple to build on a tight site”, with the solution delivering a passive house U-value of 0.12W/m2K.

Mannok Aircrete blocks (formerly Quinn Lite) are well established as Ireland’s premier block for combined thermal, structural and fire performance and we’re seeing an emergence of more houses using the blocks as much more than just a thermal bridging solution, but as a significant part of the masonry wall structure, either in cavity walls built with Aircrete blocks in the inner leaf of the cavity, or using the same methodology as Reynolds has been specifying since 2008 and has applied successfully in this latest triumph, SIMS construction.

From the extensive case study featured in Passive House Plus:

“”By using Mannok Aircrete blocks as the masonry substrate, you’re automatically improving the thermal performance or U-value of the walls, while at the same time significantly reducing thermal bridges throughout the building,” says Jason Martin of Mannok. “It is a low thermal conductivity block which gives a significant contribution to the overall energy efficiency of the build.”
Single-leaf blockwork also helps to speed up the build, with the lightness of Aircrete blocks making things easier again.
“In relation to the speed of build, if you compare it to typical cavity wall construction, you’re using half the number of blocks. For a square metre of wall, you only need ten blocks, so first off, it’s much, much quicker than building a traditional cavity wall.”

Reynolds also says that the Aircrete blocks contribute to faster drying time, and even though they cost more per block, the need for less blocks and less labour makes it cost neutral overall.

As is frequently the case, airtightness was a challenge, and was met in this case with a Blowerproof liquid airtight membrane, which Reynolds discovered in the pages of Passive House Plus. This is a BBA certified product with Class C fire rating, and is well established in Europe.

While the normal fire compartmentation requirement with a build-up like this would be to batten out the walls internally and then mechanically fix plasterboard to the battens, Reynolds established that it was acceptable in this case to use dabs of adhesive to glue the plasterboard directly to the Blowerproof-painted walls, because Mannok Aircrete blocks have a four-hour fire rating on their own. This helped save valuable floor space as well as speed up the build.”

Aside from the exceptional thermal performance, speed of build is indeed one of the key advantages to using SIMS methodology, particularly for larger developments where efficiency and time savings become a more significant benefit.

According to the Passive House Plus feature, Reynolds brought with him key learnings from previous mainstream passive house projects in Enniscorthy and Citywest, particularly around the value of a fabric first approach to energy efficient design, saying,

“These showed us that if you can hit passive levels of fabric performance, you don’t need a primary heating system, you can do it using an airborne system. So straight away, if you can spend a little bit more on your walls, particularly glazing, and make it airtight, you can eliminate your boiler and save about fifteen thousand euros.”

Wall construction aside, this is a house which oozes smart design: taking the tightest of sites and creating an adaptable home which can cater for the needs of everyone from empty nesters to a family of six, providing a comfortable living space. “The savings – in both cash and CO2 – are jaw-dropping,” according to Passive House Plus, whose feature case study is packed full of specification details and a virtual 3D tour of the finished property which is well worth a look.

The virtual guide sums up the project nicely, stating,

A Guide to Building with SIMS by Mannok